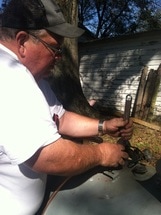 Barry Lewis runs his company with a small, family business style model based on years of work in the local community.
In 1987, Barry Lewis started Barry Lewis Electric Inc. while working nights for American Airlines.
Barry worked for McGill plumbing and Steve Owen Electric when he was in school as a teenager in the mid 1970’s. He then worked as a maintenance helper at Tobacco Growers Services, a processing plant for the Federal Tobacco program through high school. He attended Campbell University on a music scholarship and worked for Angier Baptist Church as their custodian and grounds keeper. After graduating in 1980, he worked for Newcomb HVAC company in Raleigh from 1980-1984. He then worked at RDU International Airport as ground maintenance from 1984-1987. While there, he attended Wake Tech studying Digital Electronics and Electrical Technology at night.
In 1987, he started a new job at American Airlines in facility maintenance as a mechanic, continuing his education at Wake Tech in HVAC and Electrical Engineering. In 2011, while employed at American Airlines, he obtained his NC Electrical Contractors license and heating 2 and 3 license and also obtained his first class stationary steam plant license.
Barry retired from American Airlines in 2012.

Barry has been been married to his lovely wife Tammy for 43 years. They have 2 kids and 3 grandchildren and a great dog named Maddie.

"God is good and he always provides."